How beautiful can a power station sound?

I’ve been privileged over the past few months to be working with artists Barbaresi & Round on a project documenting the impact of Didcot A power station on the people, town and surroundings.

Didcot A is a massive coal-fired power station that has dominated the landscape for 40 years. I love the shape of the six cooling towers and the solid majesty of the chimney.

Most people only got to see the power station from the outside, steadily and silently puffing white clouds up into the sky from the cooling towers. In contrast, nothing prepares you for the sheer thundering volume and vibrations inside the turbine hall. I got a huge sense of raw energy being physically extracted from the pulverised coal and turned into electricity, electricity which then disappears off into the grid along a thin wire that seems so small given the enormous scale of the power plant. 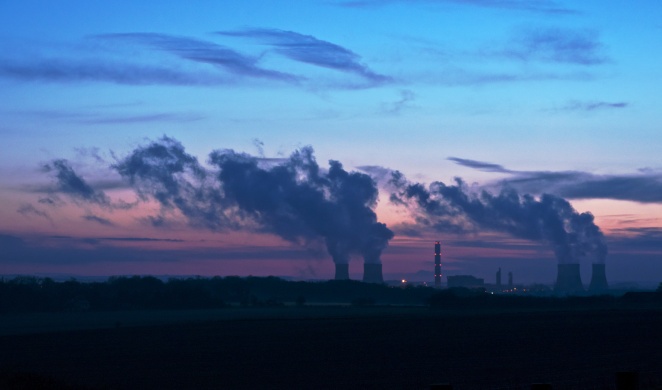 As I walked up and down the hall, I was able to capture the fascinating and beautiful hums, resonances and interference from the four machines generating power. I was enchanted: the low 50Hz bass hum, higher harmonics, wonderful beating frequencies, and a lovely steamy hiss to top it all off from vents in the turbines.

I also found it fascinating that the angular range of the beating frequencies, or other sounds, was very narrow – just a large step away from the maximum volume and they would vanish completely.

I needed very portable equipment for this visit, so I used the excellent Roland R-26 field recorder and an Audio-Technica AT897R shotgun microphone.

Making the sound installation, I wanted to give the sense of approaching, entering and departing, so I remixed the raw sound of the turbine hall using Adobe Audition to allow greater control over the wall of sound. The raw recording is quite dominated by the hiss of escaping steam that cuts across most of the frequencies, yet when I was inside the turbine hall, the sounds that cut right through came from the purer notes.

Using the spectral frequency view, I separated out small frequency ranges into 37 separate tracks and then regrouped them to give more control in shaping the mix. I then grouped the tracks into six ranges: bass (20-110 Hz), low frequencies (65-800 Hz), high frequencies (1900-2210 Hz), low noise, high noise, steam hiss (800-1430 Hz, 2420-10000 Hz). The low and high frequencies are the purer tones and tend to be harmonics of 50Hz, but with a few additional notes. Low and high noise are everything in between the pure tones. With everything grouped like this, I could then shape the final sound installation based on my own experience of approaching and entering the turbine hall.

How beautiful do you think the power station sounds? Share your thoughts in the comments below.

Massive steam turbines inside Didcot A power station. 15 March 2013, one week before the power plant closed.

5 thoughts on “How beautiful can a power station sound?”